With the Nepal Earthquake response in full swing, humanitarian relief organizations will be using cash as a form of humanitarian assistance, either as an alternative to, or in conjunction with, the provision of food or other items. Expect them to partner with mobile money service providers to support communities affected by the earthquake by delivering that cash as mobile payments. 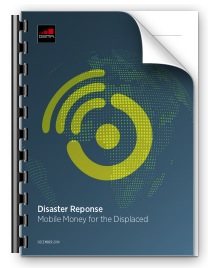 Mobile Money for the Displaced examines the use of mobile money, and discusses the challenges and opportunities for enhancing the impact of mobile money on refugees and IDPs in the future.

Mobile money facilitates flows of remittances, to women in particular. In a study by GSMA mWomen, it was found that remittances are especially critical for 31% of women, in contrast to 26% of men, who reported receiving remittances from siblings, parents, children, and spouses.17 Because women traditionally manage the household and care for children or other dependents, they generally have a great deal of responsibility over managing remitted funds.

In displacement contexts, remittances are even more critical to women due to the disruption of their families’ lives and the added responsibility this places on them. In an assessment of Oxfam’s and Airtel’s mobile money programme in DRC, half of beneficiaries surveyed stated that women were responsible for the use of cash. One-quarter claimed decisions about how to spend the cash were made jointly, while one- quarter suggested this was strictly the role of men.

Of the displaced populations interviewed in Uganda, 73% of women reported using mobile money services, compared to 60% of men. This indicates a gendered flow of remittances that mobile money can facilitate when women are able to access mobile handsets and services. The figures are also significantly higher than the overall rate of mobile money use by women across Uganda: 9% as estimated by a 2012 study.

Violence Against Women and Cash Transfers in Humanitarian Contexts – DFID

Most cash transfer programmes, whether implemented in developing or humanitarian contexts, do not have a specific focus on reducing violence against women (VAW) or improving women’s status within the family. The evidence base is still at an early stage, with only a handful of evaluations of cash transfer programmes having examined the impact of conditional cash transfers on women’s risk of partner violence in any context.

Most studies examined in Violence Against Women and Cash Transfers in Humanitarian Contexts show that cash transfers can reduce intra-household conflict (whether an aim of the programme or not) but it is unclear whether women’s bargaining position vis-a-vis men changes. Cash transfers may alleviate intra-household stress and tension over financial or food security issues which contributes to more peace and less violence in the home, rather than improving women’s relative status in the home.

Cash transfers tend not to be gender transformative but rather target women in their roles as wife and mother. It is possible that the inability of the programmes to transform gender relations was because of the lack of gender integration and analysis in programme design. Most programmes in emergencies do not report on gender at all despite the fact that cash transfers impact on intra-household dynamics.

This post was republished from ICTWorks as part of NetHope's effort to facilitate collaborative learning and community knowledge-sharing. Please click here to read the article in its original form. We are always looking for relevant and thought-provoking ICT-related posts to republish. We value your suggestions; if you'd like to recommend a post, please email our Editor-in-Chief Paige Dearing at paige.dearing@nethope.org.

Maximize Impact, But Do No Harm: Ethical

Dear Technologists: Move Fast, But Do No Harm

NetHope welcomes Salesforce.org as a Fou

The dedicated social impact team of Salesforce, the global leader in CRM, today announced they are expanding their partnership as Salesforce.org joins NetHope as a founding partner of The Center for the Digital Nonprofit.